7 - DAY TOUR
Join us on our LOW SILESIA TOUR via beautiful city of Wroclaw, mysterious Osowka underground city, an unique Zloty Stok Gold Mine, breathtaking landscapes of Gory Stolowe National Park and one of the most amazing Polish castles, Ksiaz. This 7-days tour will let you explore this fantastic district of Poland which has so much to offer.

Let us take your group on the adventure during our Lower Silesia tour 2020. The professional tour leader will meet & greet the group at the Wroclaw's airport. After the 30 minute transfer to the 3* (or better) hotel located in the city centre and the check-in, the group will meet up with the local licensed guide and go on the walking city tour along the Old Town. Wroclaw’s charming gothic Old Town was beautifully restored after WWII and today it is possible to admire one of the great examples of gothic architecture, the Town Hall of Wroclaw. The group will stroll around the Old Town learning about its history and looking for hidden Wroclaw’s dwarfs until they reach the Museum of Wroclaw University. Inside the group can discover beautifully decorated baroque interiors, including the famous Leopoldine Hall. Then the guide will take the group to former Ostrow Tumski Island where they will feel a mysterious atmosphere and visit outstanding Cathedral of St John The Baptist where the largest pipe organs in Poland are.

In the evening there will be a welcome dinner at the hotel.

In Swidnica the group will visit the Church of Peace, which is on the UNESCO World Heritage List. This large wooden church was built in 1657 without using a single nail and it was one of the few places where Protestantism was permitted after the Thirty Years' War. The group will also have a chance to see the Old Town of Swidnica itself and later have lunch in one of the local restaurants.

After lunch the group will on the Ksiaz Castle tour, to the largest residential building in southwestern Poland, the 3rd biggest castle in Poland. Its location on a rocky hilltop overlooking the wooded area that surrounds it, makes a huge impression.

Dinner at the hotel in Walbrzych.

Today the group will study the Nazi's mysterious project 'Riese' - the Giant. After breakfast the group will go to the Underground City - Osowka, the biggest and the best preserved part of the whole complex. The purpose of this work was kept secret. Some claim it was meant to be Adolf Hitler’s secret headquarters. Others say Osowka tunnels were built for underground armament factories designated to produce secret weapon.

After lunch the group will proceed to Srebrna Gora fortress which is the biggest fortress in Poland. It used to be a former military fort constructed in late 18th century, now a monument and a museum. Then the journey will continue toward Zloty Stok.

Right after breakfast the group will visit the Zloty Stok Gold Mine. Underground Tourist Route, includes visiting the "Gertruda Adit" (museum part), "the Death Pavement", meeting with the Gnome on the Death Pavement and Poland's only underground waterfall in the "Black Adit". After this unforgettable adventure the group will leave to Klodzko, the capital of the region that you are sightseeing - Valley of Klodzko. For its historical monuments it is sometimes referred to as “Little Prague”. Klodzko has the perfect communication position, centrally in the Valley of Klodzko, in the neighbourhood of well-known health resorts, excursion terrains, tourist attractions and the Polish-Czech borderland. The main monuments of Klodzko are the fortress of Klodzko which is included in the programme.

After lunch the group will depart to Polanica Zdroj one of the numerous traditional SPAs in the region. Once they arrive the tour leader will take the group on the orientation tour around the town.

On day 5 of the tour we planned for the group to spend some time with the nature by visiting the National Park of Gory Stolowe (Table Mountains). Firstly they will visit Bledne Skaly Labyrinth where with an expert local guide they will pass through an amazing rock formations. The packed lunch will be served today. The group will also hike Szczeliniec Wielki Mountain, the highest peak at Table Mountains (919 m), it is one of the biggest tourist attractions of this region of Poland.

The evening is free for you so everyone can use some SPA time at your hotel.

After breakfast the group will have some free time to use SPA facilities or take a walk before departure. Once the group arrive to Wroclaw they will have free time at their leisure. For volunteers we can arrange the visit at the National Museum to see the famous Panorama Raclawicka painting.

Farewell dinner at the hotel.

It's the last day and your adventure in Poland ends at the Wroclaw's airport. 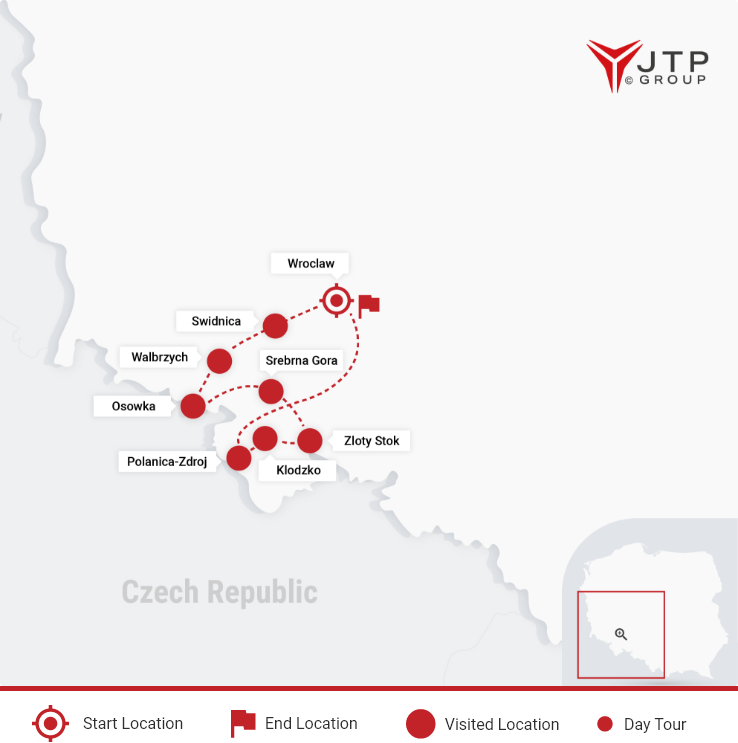 Is Lower Silesia worth visiting?

Lower Silesia region is one of the most beautiful regions on the whole Poland. It is full of amazing monuments such as Ksiaz Castle, SPA destinations, nature spots and most of all Wroclaw is there a great city with loads of attractions to offer and the cost of living there is quite cheap compared to other european cities.


What should we see around Wroclaw?

Wroclaw is a very beautiful city with plenty to see, restored Old Town, mysterious Ostrow Tumski Island and many others. Our deal of Wroclaw city break has all essentials included so the group can get to know this city as well as possible.


Where exactly in Lower Silesia is located?

Lower Silesia region is located in the south-west part of Poland. It is only 3.5-4 h away from Krakow so it is also a good idea to combine tours at both cities while visiting Poland.


Is it easy to fly to Wroclaw from UK and Ireland?

Yes, there is an airport located around 30 minutes away from the city centre. There are also plenty of direct connections to Wroclaw from ex. London, Edinburgh, Glasgow, Birmingham, Manchester. There are also direct flights from Dublin, Ireland. Also prices are quite reasonable.


How to get to Ksiaz Castle from Wroclaw?

The easiest way to get to Ksiaz Castle is to book a tour with JTP Group.

TOUR TO KSIAZ CASTLE FROM WROCLAW

Ksiaz Castle is the largest castle in the Silesia region and the third biggest in Poland, located in northern Wałbrzych about 85 km south from Wroclaw. It is located in the Ksiaz Landscape Park, built on a rock cliff by the side of the Pelcznica river, beautifully surrounded by the forest.

Built in the 13th century, the object had many owners over the centuries, including the Polish king Wladyslaw Jagiellonczyk. From the 16th century up until the World War II, the castle belonged to Hochberg family that renovated and modernized it, for example created the impressive French gardens. In 1943 Hitler’s paramilitary organization stormed into the Castle to establish quarters for Adolf Hitler. The castle represents different architectural styles, such as gothic, renaissance, baroque and rococo thank to numerous renovations.

Ksiaz is often called ‘the Pearl of Lower Silesia’ or ‘the Fairytale Castle’.

The visit at the castle takes approximately 45 minutes with a local expert guide and later the group is given some free time.

At the end of year 1943, in the Owl Mountains in Lower Silesia, Germans commenced the construction of Riese objects, including the Osówka complex. The work was conducted in many different places. Defensive systems on the ground and underground shafts were built. The work was interrupted at the beginning of 1945 due to the approaching Red Army and Polish Army. After the War, the object got plundered and closed.

The purpose of this work was kept secret. Some claim it was meant to be Adolf Hitler’s secret headquarters. Others say these halls were built for underground armament factories designated to produce secret weapon. The level of advancement of the work performed here places the constructions on the first position as the most complete ground objects belonging to the undertaking "Riese" (German term for Giant) in the Owl Mountains.