3-day tour
Visit Krakow, the City of Polish Kings, considered as cultural capital of Poland. Come and discover Polish history, try delicious Polish food and enjoy your time in this charming city during one of our weekend city breaks to Krakow. On each of our deals you will have a chance to visit 3 UNESCO World Heritage Sites starting with Krakow’s Old Town & Jewish Quarter, the biggest Nazi concentration camp Auschwitz-Birkenau and the Wieliczka Salt Mine. Nowadays city breaks to Krakow are very popular among tourists in Europe so do not hesitate any longer and visit Krakow with JTP Group on one of our 2 or 3 night breaks. Programmes of our city breaks are the most interesting among any Krakow breaks offers you’ll find. They are full of attractions,activities and above all supervised by professional tour leaders and local expert guides. Below you can check out our offer of 3 days city break package.

Let us take your group on the adventure during one of our city breaks to Krakow. The professional tour leader will meet & greet the group at the Krakow's airport. After the 30 minute transfer to the 3* (or better) hotel located in the city centre and the check-in, the group will meet up with the local licensed guide and go on the walking city tour around the Old Town which is listed as an UNESCO site since 1978 which makes it one of the first 12 sites on the famous list. During the sightseeing tour the group will follow the Royal Route, used for centuries by monarchs and national heroes for celebratory parades. The route starts near the Barbican and Florianska Gate where the group will learn about Krakow’s walls and fortifications. The tour would not be complete without a visit at the biggest medieval Market Square in the world, passing through the Cloth Hall, admiring the St. Mary's Church, and listening to the Krakow's famous bugle call. The guide will also lead the group through the University Quarter with Collegium Maius, the oldest building of the Jagiellonian University, the 2nd oldest university in the world. The city tour finishes at the Wawel Hill where the former Residence of Polish Kings - Wawel Castle is situated.

After a short stroll around the hill and some history lesson the group will come back to the hotel where a welcome dinner will be held.

On the way to the museum the group will watch the documentary “Liberation of Auschwitz” that gives a little bit of the background to the history which will be better presented on the spot by one of the local expert guides. The group will spend around 3.5h at camp visiting both parts: Auschwitz I, where the main exhibition is held and Auschwitz II - Birkenau, the memorial site. In the first part of the camp the group will be led by the guide into the camp via the gate with an infamous inscription Arbeit macht frei (Work makes you free). The group will see prisoners’ barracks, places of work and original blocks, where they were being punished. You’ll see railroad tracks that transported people often straight to gas chambers, that were used for extermination. At Auschwitz II - Birkenau, which is located 3 km away from the the main part, the group will see the main gate via which transportation of Jews were driven into the territory of camp, the unloading ramp, ruins of crematoria and gas chambers destroyed by Nazis during the evacuation plan and some original brick or restored wooden barracks.

The lunch will be arranged in one of the local restaurants after the visit and afterward the group will come back to Krakow where the tour will be continued with the sightseeing of the former Jewish Ghetto area and the Jewish Quarter - Kazimierz. The Jewish ghetto was established by Nazis and existed from 1941 to 1943. During this tour our Krakow guide will show the group the only remnants of ghetto walls. The group will also see the Eagle Pharmacy, which was run by the only Pole living in the ghetto - Tadeusz Pankiewicz and buildings of the Schindler’s Factory museum. Across the river there is Kazimierz, best preserved Jewish quarter in Poland. This sleepy neighbourhood was once a separate city and a vibrant Jewish culture centre. It was destroyed during World War II and after being left neglected for many years, it has recently welcomed visitors again. It is the heart of Krakow bohemian life. Our Krakow guide will show the group places that tell more than a thousand words about Jewish heritage in today’s Krakow.

The dinner will be arranged in one of the local restaurants that offers traditional local food. During the dinner the group will also enjoy the concert of the Klezmer music.

It is the last day in Krakow but before going back to the airport we will take the group on the trip to Wieliczka Salt Mine another UNESCO listed site during our city breaks to Krakow 2020. Wieliczka Salt Mine is one of the oldest in the world and was established in the 13th century by by Polish king Casimir III the Great, it was the biggest provider of salt in Poland. Today salt is no longer mined in Wieliczka, but this original underground complex is preserved in a great condition, making it a world-class monument.

After breakfast the group will check-out of the hotel and depart on the tour with their luggage. Wieliczka is located only about 30-40 minutes away from Krakow so it does not take long to get there. With the local expert guide the group will descend into a magical world of chambers, corridors and chapels made of salt by taking 400 steps at the very beginning of the route. The programme includes the visit to the impressive Chapel of St. Kinga where even chandeliers are made of salt crystals. This 54 m long and almost 12 m high chapel resembles interiors of medieval wooden churches and is a real underground wonder. Many prestigious concerts were hosted in St. Kinga’s Chapel due to its excellent acoustics. The visit at the mine will take approximately 2-2.5h after which the group will have lunch in the local restaurant. After lunch our tour leader will take the group to the Krakow airport and say goodbye to everyone. 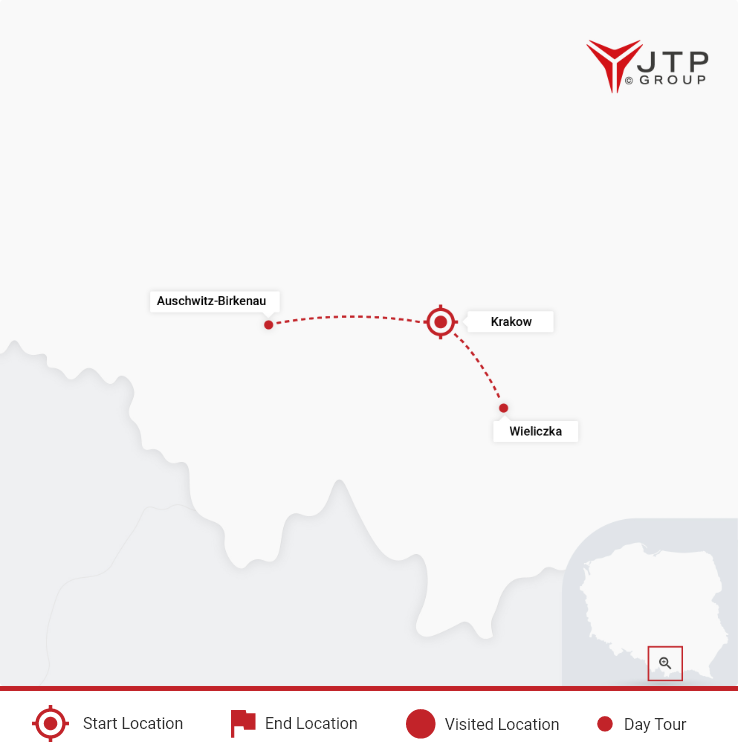 FAQ about the weekend city breaks to Krakow:

Krakow city breaks are the most popular tours chosen by tourists especially from UK, Germany, USA and many others. The city is an amazing choice for short holiday as it has a lot to offer. Krakow breaks with JTP Group allows you to visit the most important and popular attractions in Poland.

How long do you need for a Krakow city break?

We recommend to come for 3 days / 2 nights to make sure that you cover the most important attractions as it is presented in our deal above. But our company also provides 3 night stay Krakow city breaks so if you wish to extend the group’s stay please contact us.

Is Krakow a good city break destinations for children?

Krakow city breaks are perfect for children offering plenty of interactive museums where the youngest ones can have plenty of fun, ex. The Pinball Museum, The Krakowski Obwarzanek Museum. Also, thanks to the vicinity of the museum Auschwitz-Birkenau, Krakow is a great destination for educational school trips. JTP Group can organize cheap city breaks to Krakow for schools from all over the world.

What to see around Krakow?

On Krakow breaks with JTP Group beside visiting Krakow’s Old Town, Jewish Quarter and former Jewish Ghetto area in the very close vicinity you can find an amazing Salt Mine Wieliczka, the biggest former concentration camp Auschwitz-Birkenau, both are listed on the UNESCO World Heritage List.

From what cities in the UK and Ireland I can fly directly to Krakow?

Plenty of British and Irish cities are directly connected with Krakow airport, ex. Newcastle, Dublin, Shannon, Glasgow, Belfast, Liverpool, Manchester, Birmingham, Edinburgh. So city breaks to Krakow from all over the UK and not only are possible to arrange.