3-day tour
Come to Gdansk, the city located by the Baltic Sea where you can admire colourful architecture of the Old Town filled with maritime atmosphere. Our 3-days GDANSK CITY BREAK package will take you on the adventure around the Tri-City agglomeration during which you will learn about rich history of Gdansk, walk along the beach in Sopot and visit the famous port in Gdynia.

Let us take your group on the adventure during one of our Gdansk city breaks. The professional tour leader will meet & greet the group at the Gdansk's airport. After the 30 minute transfer to the 3* (or better) hotel located in the city centre and the check-in, the group will meet up with the local licensed guide and go on the walking city tour along the Gdansk Main City and Old Town full of maritime atmosphere.

During the sightseeing the group will see the iconic sites in the Main City: Long Market - the most representative square of Gdansk located in between two famous city gates: Golden and the Green Gate, Neptun’s Fountain, St. Mary’s Church - the largest brick church in the world, and many others. The guide will take the group atmospheric shops with handmade amber jewellery in the narrow streets of the Main City where some shopping can be made. The walk around Gdansk will leave the group charmed by well-preserved renaissance architecture.

After the sightseeing there will be a welcome dinner held in the hotel.

You will start the day at Westerplatte where the first clash between Polish and German forces during the invasion of Poland and thus the first battle of the European theatre of World War II. Afterward, you will head to Oliwa, where you will relax at the beautiful park and visit the Oliwa Cathedral where you will have a chance to listen to its famous organ concert. Then you will visit Sopot and walk along its promenade and enjoy some beachfront attractions. The lunch will be arranged in one of the local restaurants before the free time you'll have there. At the end of the day you will visit Gdynia, Polish famous port city, where the battleship “Lightning” and frigate “Gift of Pomerania” are reminders of the rich history of the Polish Navy and the country’s shipbuilding traditions.

Our Gdansk city breaks 2020 would not be completed without teaching the visiting group about Solidarity movement and Lecha Walesa, the laureate of the Nobel Peace Prize, who played a major role in bringing an end to the communist regime.

After breakfast the city guide will pick the group up at the hotel lobby and take them on the Solidarity Tour during which they learn about turning points in the history of Gdansk and understand their importance in bringing an end the communist division of the world. The tour will start at the European Solidarity Center, where the group will visit the multimedia exhibition related to the history of communism, birth of the Solidarity, introduction of the Martial Law, the first free elections, and the collapse of communism regime. Afterwards the group will visit the former premises of Gdansk Shipyard passing the most important places connected with 'Solidarity'.

After a quick lunch the group will be dropped off at the airport. 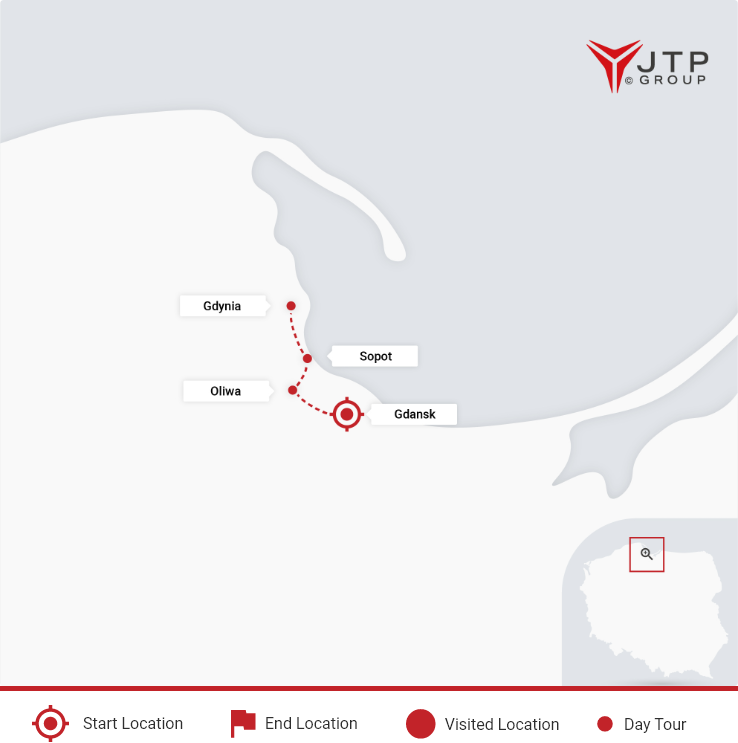 FAQ about the Gdansk city breaks by JTP Group:

Gdansk is a great city break destination thanks to the fact that it is located by the sea so you can take the advantage of activities connected with water such as cruises, swimming, etc. It is also a very good choice if you are interested in the history of World War II or era of communism and Solidarity movement.

What there is to see around Gdansk?

Beside Gdansk’s beautiful city centre full of marvelous monuments we recommend to visit other two cities of Tricity - Sopot & Gdynia during the holiday to Gdansk, Poland. For history geeks JTP Group can arrange the one day tour to Stutthof - Nazi concentration camp or to Malbork Castle to see one of the biggest castles in Europe.

Where exactly in Poland Gdansk is located?

Gdansk is located in the northern part of Poland, on the coast of the Baltic Sea.

Are there any direct flights from UK to Gdansk?

Yes, of course, there are some. You can arrange city breaks to Gdansk from London or Birmingham directly. Due to the current situation with the pandemic of COVID-19 it is worth checking as it may change.

Is it possible to combine city break to Gdansk with any other Polish cities?

As Gdansk is a part of Tri-city we recommend visiting just this area during the 3-days city break. Our cheap city breaks to Gdansk, Poland do not combine with Warsaw or Krakow but you can take a look at our programme Best of Poland that takes 12 days and enables the group to see more of our country.